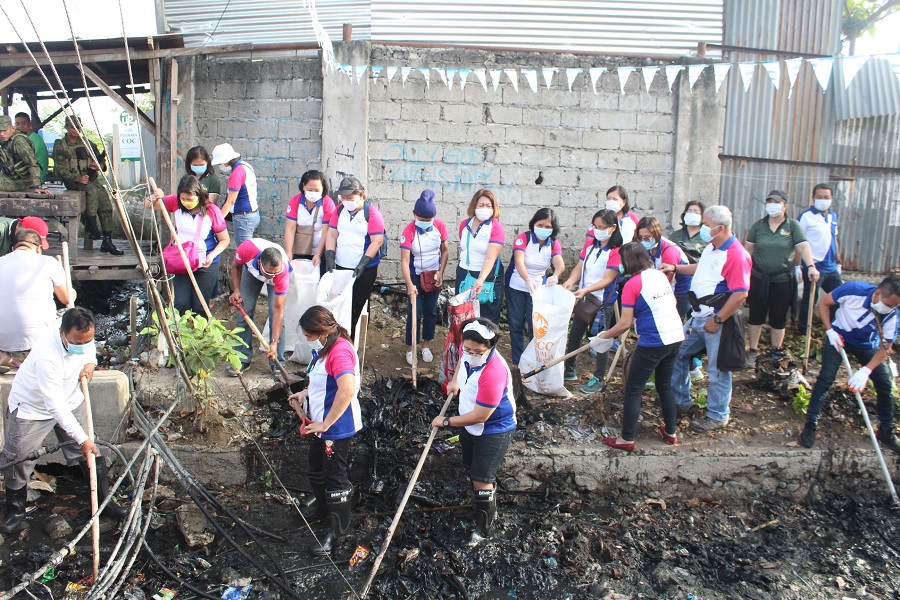 Cagayan de Oro City- In celebration of the World Water Day with the international theme “Leaving no one behind” and local theme “Hawak Kamay, Tubig Kaagapay” with regional tagline FoRIVER-Together forever for cleaner rivers and hashtag #RiversForLife, the Department of Environment and Natural Resources, Region 10 (DENR 10) headed by Regional Executive Director Arleigh J. Adorable conducted a clean-up activity on the creeks of Barangay Macabalan on March 22, 2019, this City.

He also cited in his message the effects of climate change as the one of the causes of the El Niño phenomenon that most of us are experiencing now and the water crisis that Metro Manila residents have experienced.

Prior to the proper clean-up activity, Ms. Kristine A. Galarrita, the Program Manager of Macajalar Bay Development Alliance discussed the importance of the World Water Day 2019 celebration. Ms. Angel Christery B. Castino of DENR 10 led the recitation of Tayo ang Kalikasan (TAK) Pledge. Regional Executive Director Arleigh J. Adorable led the signing of the TAK Pledge Wall with other officials from different offices and organizations.

A total of 10,938 kilograms of trash such as plastics/plastic bottles, cigarette butts, cellophanes, rotten clothes, diapers, food and candy wrappers, old tires and other wastes were mostly collected during the activity.

Meanwhile on March 25 during the Monday flag raising ceremony, DENR 10 RED Adorable took the opportunity to thank DENR 10 employees, the Environmental Management Bureau and the Mines and Geosciences Bureau and all participating agencies and stakeholders who attended the simultaneous clean-up. He hoped that through this noble cause, the city council as well as the barangay council could help implement more stricter ordinances related to Solid Waste Management Act to save our rivers.

On the other hand, a clean-up activity was also undertaken on the same day (March 22) by the Provincial Environment and Natural Resources Office (PENRO) of Misamis Oriental and Community Environment and Natural Resources Office (CENRO) of Initao at Bitan-ag Creek, Lapasan, Cagayan de Oro City while CENRO-Gingoog City along the Gahub river in Gingoog City.

A bamboo planting and river clean-up was also conducted along Aloran River, Aloran, Misamis Occidental. The activity was spearheaded and attended by CENRO-Oroquieta City personnel with the local community in the area. #TayoAngKalikasan (RSCIS, MR # 04-099-2019)