The modern-day Battle for Manila Bay—now affixed with a hashtag—begun more than a decade ago. The order of the Supreme Court to 13 Mandamus agencies to rehabilitate Manila Bay in 2008 was the first official attempt to save the troubled waters.

The high court directed these agencies—with the Department of Environment and Natural Resources (DENR) at the front line—to revive the bay to the level that is fit for swimming and other forms of contact recreation. But with the threats that kept on draining its remaining life, what hope is left for today’s Manila Bay?

The waters of the Manila Bay Area span beyond the seascape of Roxas Boulevard. Its 190-kilometer coastline passes across the inland areas of the National Capital Region, Central Luzon, and CALABARZON, mainly Cavite and Batangas. 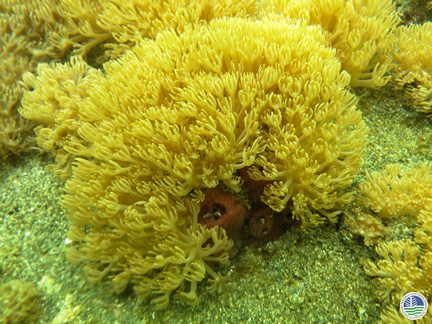 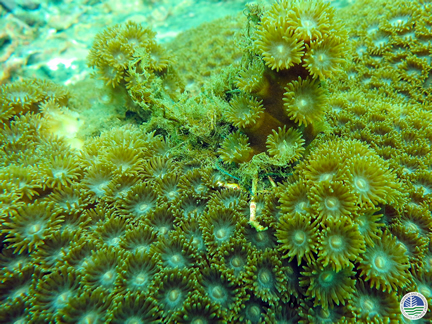 Extended polyps of Turbinaria sp. along the reefs of Corregidor Island in Cavite —Photo by JIM Padin (2018)

The Ecosystems Research and Development Bureau (ERDB), the research arm of the DENR, is currently gathering data to assess the vulnerability of the bay to climate change impacts. The project is being implemented by a team of science practitioners of various disciplines seeking significant, research-driven information on the factors influencing the present state of the bay and its vulnerability to different hazards. The project components include terrestrial, coastal, freshwater, air and water quality, social, and solid waste management.

As part of the coastal component, Jose Isidro Michael T. Padin, Supervising Science Research Specialist at the ERDB, and his team did an inventory of coral communities in the provinces of Bataan and Cavite.

“Of the MBA’s total reef area of 293.68 hectares, nearly 72% of the estimated reef area is found in Cavite. The reef sites in Maragondon and few on Corregidor and Caballo Islands had fair to good live coral cover, but these reefs are continually threatened by sedimentation, nutrient contamination, reduced water clarity, and high fishing pressure,” Padin said. 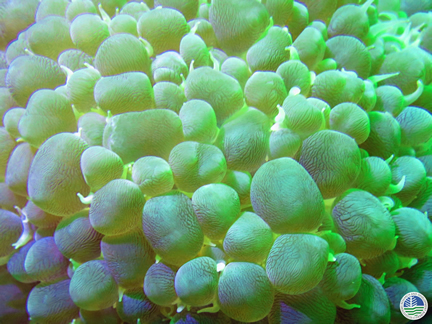 Runoff of sediments and nutrients, for instance, had been documented to cause coral mortality by smothering and burial, low coral recruitment, reduced coral diversity, change in community structure, macro-algal abundance, reduced calcification, and reduced live coral cover in many reef ecosystems around the world. Padin explained that “the remaining reef areas in the bay are located proximate to the mouth of Manila Bay (areas of Corregidor, Bataan, Ternate, and Maragondon), where water circulation is relatively strong. Strong water current can reduce stress on corals by limiting sediment deposition at the bottom and on coral colonies. It can also facilitate transport of fresh supply of plankton and improve water clarity by flushing of land-based materials out of the bay.”

Corals filter organisms in the water as they feed on planktons. Corals also need light to support the photosynthetic activity of symbiotic algae living in their tissues.

Padin and his team learned that in “Corregidor and Caballo Island in Cavite—based on the National Mapping and Resource Information Authority (NAMRIA) coastal resource map—the reef area spans to 293.68 hectares. This does not include the reef in Mariveles, Bataan since the NAMRIA map has no record of corals there. However, when we checked two of the purported seagrass sites using SCUBA, we sighted corals instead.”

ERDB Director Sofio B. Quintana said the coverage of this research encompasses terrestrial and marine ecosystems. “In the ridge-to-reef research on the Manila Bay Area, we are seeking for a definite connection among risk factors. Right now, we are trying to explore more data on informal settler families, air and water quality, and habitat to make scientific studies relevant for future projects.”

According to Director Quintana, the Bureau is trying to come up with a unified framework for these projects. Consolidated properly, these could make an inference on the status of the Manila Bay Area.

Part of ERDB’s initiative is to influence policymaking bodies. “We want to provide reference in their decision process backed-up by research. If there are existing policies, maybe we could harmonize and align researches to these policies,” Quintana said. 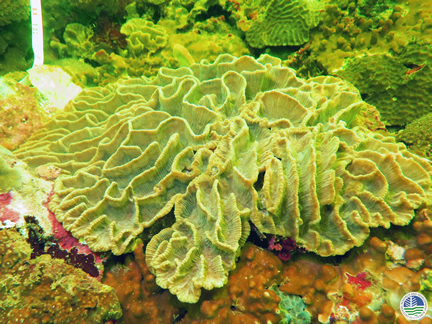 This lettuce coral Pectinia sp. in Maragondon, Cavite makes an underwater architecture with its elongate valleys and thin walls. —Photo by JIM Padin (2018)

The Manila Bay Area works like a nature’s septic tank draining 17 major river systems in nearby cities and provinces. Wastes from households and industries from these estuaries pose the most apparent threat to the bay. The DENR data showed that only 15 percent, or an estimate of 2.4 million out of 16.3 million, of the water-served population of the National Capital Region are linked to a sewerage system.

Other than the unregulated sanitation and waste disposal, the Manila Bay Area is also vulnerable to the dangers of noise pollution, the presence of invasive species brought by international cargo ships, and illegal fishing activities.

“What we only see from above is the surface of another living world underneath us. People should understand that Manila Bay is home to other life forms despite its rapid deterioration. There remains hope in Manila Bay. It is not yet too late to revive the life out of its troubled waters,” said Quintana.

The Manila Bay has been a witness to Philippine’s historical narrative and to Filipinos’ rise and fall in our environmental battle within our waters. The Battle for Manila Bay is far from over—but hope is still in sight. —­Christele Jao Amoyan 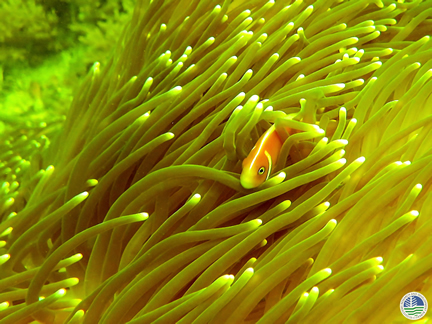